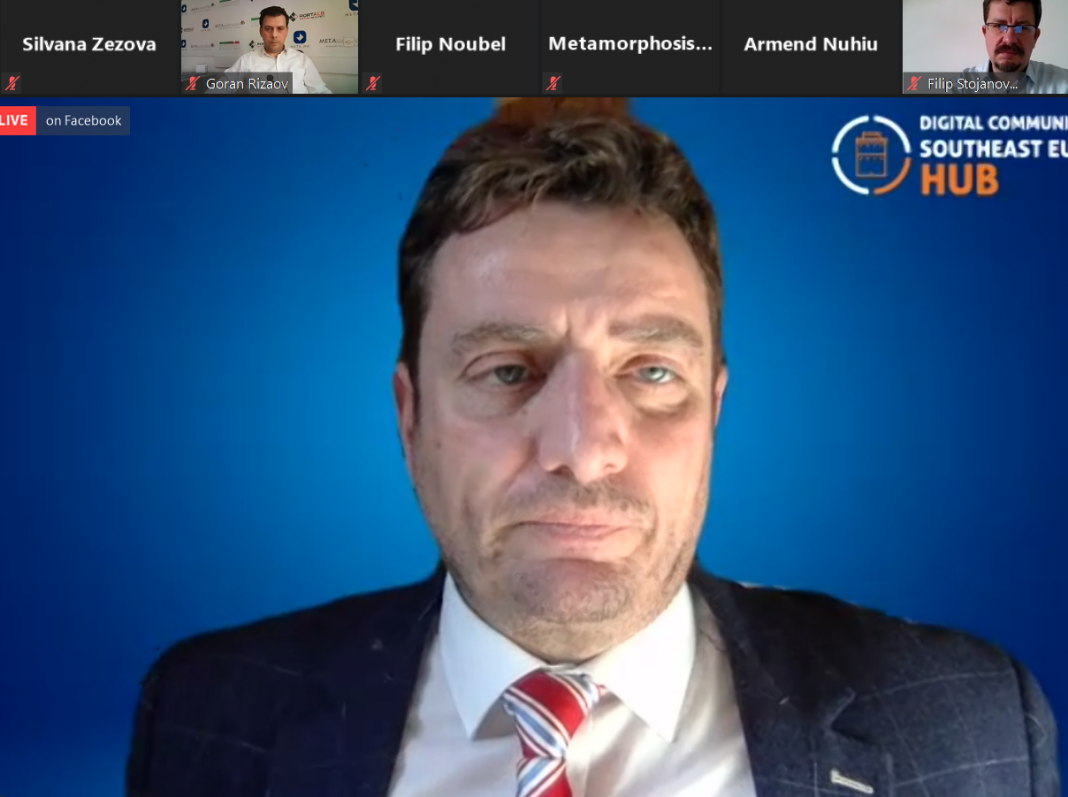 Journalism is at the crossroads today, with the mounting risk of being forced to withdraw from the place called “The Noise” and where it can’t think. These are places where the journalists can be manipulated to spread fake news, places that were created to spread fake news, in order to discredit the journalists. This was pinpointed today by Associate Professor at the Department of Journalism and Mass Media at the Aristoteles University in Athens Nikos Panagiotou during the session named “The Role of Watchdog Journalism Toward Good Governance” as part of the two-day International conference “E-Society.mk“.

“This discreditation of the journalists is causing trust in them to die, which in turn is opening the road for other factors that are presenting themselves as journalists so that they can spread lies. The public, when it loses its trust in journalists, seeks other channels to inform itself. This in turn leaves space for manipulation,” said Panagiotou.

The professor provided an example i.e. polls for the public opinion in Greece concerning COVID-19 that has shown that 80% of the public didn’t believe the media regarding the reporting about the virus. According to him, this has become normal in the Western World, and if this problem isn’t addressed, the current situation cannot be overcome.

“One of the ways to address the weaknesses is for the journalists to focus on the validity over the speed of news spread. It isn’t important if you have published the news first, but whether you are correct, so that you will not to be discredited. It is important to put the stress on the significance of the information instead of just providing it. The third issue is source verification i.e. use several sources instead of relying on rumors,” explains Panagiotou

The problem with the lack of trust was also stressed by Bill Silcock, an Assistant Dean for Research and International Programs at the Walter Cronkite School of Journalism and Mass Communication at Arizona State University. In the video interview that was presented as part of the “The Role of Watchdog Journalism Toward Good Governance” session, Silcock said that the public doesn’t trust the journalists, and this mistrust can be related to politics, Twitter, or something similar.

According to him, what is most important is the rebuilding of the public’s trust. Students at the journalism school are learning about ethics and making ethical decisions.

“Journalists should help the public to understand the ways they are doing their jobs. When they have an understanding of how we work, they shall begin to trust us,” said Silcock during the interview.

He also stressed that social networks teach us how we should be communicating with the public and there is nothing bad with that.

Philip Nuebel, the Managing Editor of Global Voices spoke about digital desks in the time of COVID-19 for which he has said that because of the virus pandemic and travel restrictions, these desks have gained a bigger sense. because of the business models of the media, the majority of these have vanished and have moved to the digital area.

The Director for Partnership and Resources at the Metamorphosis Foundation, Filip Stojanovski, stressed that in the fight against disinformation what is important is the synergy of various factors that are focused on defending people’s rights online. he stressed that it is important for various sides such as civil society organizations and the private sector to have access to the process of media literacy.