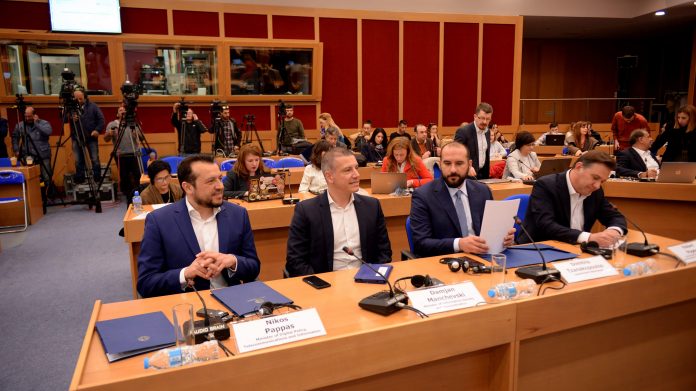 The road to overcoming the decades-long dispute between the two countries was not an easy one, and fake news was a powerful tool for enemies of the Prespa Agreement, said Minister for Information Society and Administration, Damjan Mancevski at the Greek-Macedonian conference “Fake News on the Prespa Agreement “, which is being held today in Athens.

At the beginning of the event, which featured Macedonian journalists and representatives of civil society, the Minister of Digital Policy, Telecommunications and Media, Nikos Pappas said that Greek society is a victim of the fake news which has been feeding on nationalism. For the Greek authorities, the Prespa Agreement is a reality and created a new policy in Europe, while the public was flooded with fake news, starting with the most common that “with the agreement, Greece renounced and handed over the name Macedonia”.

Minister Manchevski pointed out, the road to overcoming the decades-old problem between the two countries was not easy, and the fake news was a powerful tool for the enemies of the Prespa Agreement.

“Fake news and digital propaganda are always aimed at manipulating the hidden fears and basic instincts of the public. They always pass a message of nationalism, division, struggle, conflict, strong emotions, hatred, ethnic issues … This was the case with the fake news regarding the Prespa Agreement. The basic form of media manipulation was the “incomplete reporting”, meaning deliberately not informing the public about the key fact that the official website of the Government shortly after the signing, had published the official text of the agreement”, said Minister Manchevski.

As he underlined, in the period from 1 April 2018 to 15 March 2019, a total of 35,261 articles in the Macedonian language and 13,995 in Albanian were published. Analysis show that on average 10% of these articles contained information aimed at not informing the public, or aiming to present inaccurate information as facts.

The Minister without Portfolio, in charge of communications, accountability and transparency, Robert Popovski, said that “only the truth is a tool to combat fake news”.

Filip Stojanovski, from the Foundation for Internet and Society “Metamorphosis” spoke about the need of such joint events and presented projects by Metamorphosis for combating misinformation.

“The conference is an extremely important event because it provides the basis for cooperation not only between governments and other state and public institutions and the media, but also because it is possible for the first time at this level to provide synergies with the experiences of civil society organizations. The approach by “Metamorphosis”, which combines the promotion of ethical journalism by fact-checking and promoting media literacy, was cited as an example of comprehensive work. It was pointed out that misinformation surrounding the Prespa Agreement had fertile ground because they manipulated the emotions of citizens from both sides of the border, exploiting nationalistic prejudices that had been built for decades”, said Stojanovski.

After today’s visit by the two ministers to Athens, Greek Prime Minister Alexis Tsipras comes to Skopje next week, the first official visit of a Greek prime minister to the country. He will be accompanied by a large delegation of businessmen.