I had long and substantial meetings, and hopefully they were constructive, and in the coming days we will see how constructive, announced this evening in Skopje the High Representative of the Union for Foreign Affairs and Security Policy, Federica Mogherini after meetings with party leaders and President Gjorge Ivanov.

She said that the goal of the visit was to confirm that the Balkan’s place is in the EU.

“We know that the citizens want to be into EU. We lost a lot of time, but it remains for the politicians to decide whether they want to proceed forward. We are committed to continuing the pushing the process forward – said Mogherini.

She stressed that during the meetings, the political crisis was discussed and how to overcome it.

“Obviously, my visit comes at a time when the country is in a political and institutional crisis. The main issues we discussed were about how to exit from this crisis. It is not up to the European Union to say how, but it’s up to the EU as a friend who cares about this country and the citizens, to indicate what worries us and what is a violation of democratic principles and spirit”, said Mogherini

The European High Representative stressed that nowhere in the democratic world is there a parliamentary majority which represents the majority of citizens in a unitary state and is denied the opportunity to form a government – that is contrary to democratic principles and is contrary to Euro-Atlantic values. She also said that she had asked from Ivanov to reconsider his decision in the interest of the will and in the interest of all citizens in accordance with the Constitution of Macedonia which says that “the mandate is given to the leader who has a majority in Parliament.”

“All political leaders have a responsibility to soften the rhetoric and not to allow the situation to grow into an interethnic or geopolitical conflict. This is a complex country, in a complex region and we don’t need any fire”, said Mogherini, saying that Macedonia is not exposed to outside threats, but to serious internal problems.

She expressed hoped that the political leaders will find a solution, in accordance with the Constitution and in a responsible way will get the country out of the crisis.

“When this happens, the EU and the international community will stand on Macedonia’s side and finally steps will be taken towards euro-integration”, said Mogherini. 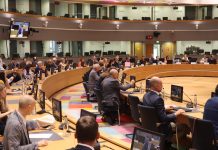