The German Ministry of Foreign Affairs said that President Gjorge Ivanov’s statement that the German Ambassador Christine Althauser, is reporting false information to Berlin – is inappropriate.

“We are pleased that, after a long period of consideration, President Ivanov has managed to reach the right decision and given up his obstructionist stance. Accusations directed at German diplomats and those of other friendly nations are inappropriate. It is a well-known fact that the assessments conveyed to the guest country always emerge in close coordination between the Foreign Ministry and the Embassy itself”, said the reaction issued by the German MFA.

Otherwise, the German Ambassador Christine Althauser was asked to comment about Ivanov’s statement and she said today that she has great professional relations with the president and that her work is highly valued in Berlin.

– Personally, I have great professional relations with the president as with other politicians in the country. My work is highly valued in Berlin, by the Minister of Foreign Affairs and the Chancellor, and I’m constantly in touch with the government in Berlin – said Althauser who was present today at the conference for a collaboration between the Visegrad group and the Western Balkan countries that took part in Skopje.

She didn’t want to comment more about Ivanov’s statement and she shared a saying “The more enemies, the more honor: President Ivanov has accused the Ambassador that she was sending false information in Berlin, because of which, allegedly, the German Chancellor had to apologize because of the information she was receiving in Skopje. 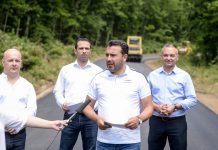