Small fire that broke out in the Government building on Ilindenska street in Skopje this morning is localized and caused only minor damage, states Meta’s reporter.
According to our sources, fire broke out in the eastern block of the Government building.
Three fire units immediately rushed to the spot, but no greater intervention was needed.
Investigation of the cause of the fire is ongoing, and, according to unconfirmed information, it was probably caused by electrical installation failure. 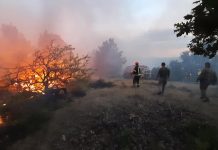