From today, state health inspectors and environmental health officers will continue to monitor kindergartens, after a temporary ban on the admission of children who haven’t been vaccinated with the MRI vaccine, Irina Bukhova, the director of the inspectorate, told “Meta”.

“Our inspectors have been in the field since the ban began. From all the kindergartens that were checked so far on the territory of Skopje, no concessions were made in any of them. However, I would like to emphasize that because of the holidays, a very small number of children were in kindergarten. From today, inspections continue and will last as long as the decision to ban the admission of unvaccinated children is in force,” Bukhova reports.

She reminds that there are fines for the legal guardians in kindergarten who admit children without a vaccine.

“Fines for the legal guardians range from €2,000 to 4,000 euros, and the responsible person will have to pay 30% of the specified amount,” says the director.

The Ministry of Health declared a measles epidemic on January 3. For the first time a measure was adopted – a ban on admission of non-vaccinated children with MRI vaccine for measles, mumps and rubella. Since then, more than 1,000 children have been vaccinated. 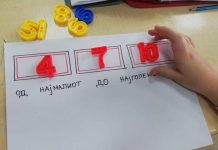 Truthmeter.mk: Small Steps Towards Big Changes For Children With Disabilities in Macedonian Education