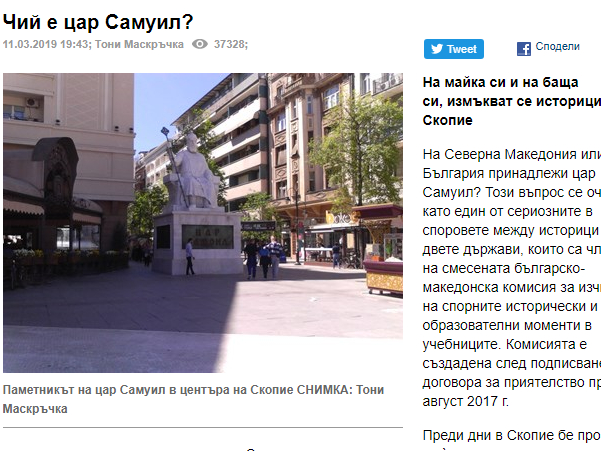 Yesterday, Bulgarian daily newspaper, “24 Chasa” published an article that apparently refers to the work of the joint Macedonian-Bulgarian Commission on textbooks and history, however, it in fact represents another history lesson, in the eyes of Bulgarian national-romanticists.

The article, that portrays traditional Bulgarian historical views, does not take into account the facts that have been established by Macedonian historians, as well as those presented by world historians and anthropologists. One thing that sticks out in particular is the attempt by “24 Chasa” to show that Macedonians, during the Second World War welcomed the entry of soldiers of fascist Bulgaria.

Although it is indisputable that in some towns and villages the soldiers were given flowers and were warmly welcomed, the newspaper “forgets” that such encounters were organized by a small part of the then population, and not “whole cities” as claimed. Although there was euphoria, which was certainly caused by the surrender of the military and police forces of the Kingdom of Yugoslavia, but it did not last long. Soon, the population on the territory of today’s Republic of Macedonia believes that the new government is not much better than the previous one, and support is rapidly fading, which Mihail Ogjanov, a university professor and native of Ohrid, and is self-aware Bulgarian, testifies to in his book “Macedonia – A Survived Fate”. He also outlines his own perceptions, as well as the perceptions of Bulgarian officials.

The newspaper “24 hours” is bothered by Macedonian textbooks and the way they speak of the Bulgarian fascist occupation, but world history has long since placed Bulgaria in the fascist regimes as a country that quickly joined the Rome-Berlin-Tokyo axis.

Consequently, the article by the newspaper can be indisputable for the national-romanticists of Bulgarian provinces, but not for the “dry”, that is, objective history and historians.

The Macedonian Academy of Sciences and Arts publishes a Linguistic Atlas...