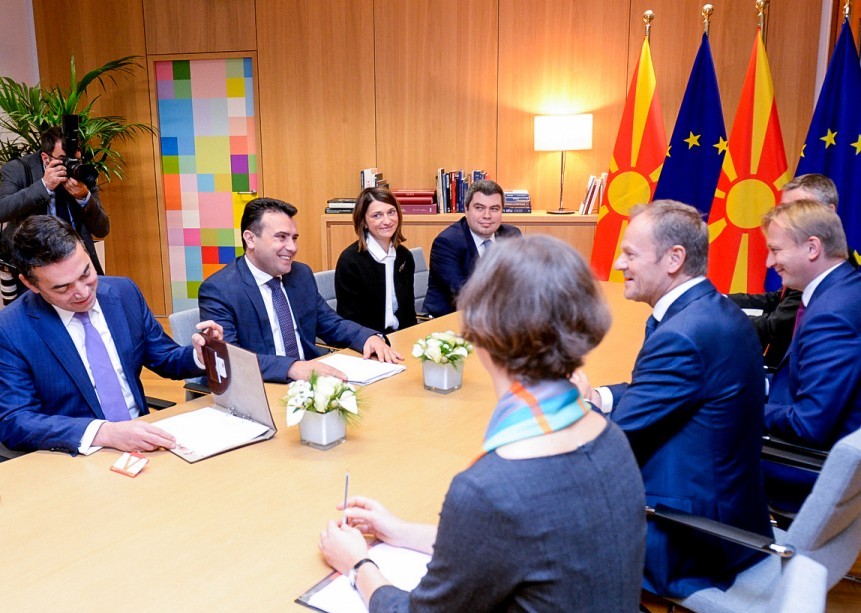 Prime Minister Zoran Zaev, accompanied by Foreign Minister Nikola Dimitrov, started their working visit to Brussels with a meeting with the President of the European Council, Donald Tusk.

At the meeting, it was concluded that the country’s determination to resolve the major political issues with neighbours and bringing reforms in the key areas of the judiciary, security services, public administration, the media, the fight against corruption, has put Macedonia on the right track towards European integration.

“The message is that if Macedonia continues at this pace, if the Prespa Agreement is implemented and if key reform priorities are implemented, it can make up for some of the lost time in the integration process and hope for the start of the negotiations to be in June 2019,” reports the government.

At the meeting with Tusk, Zaev informed that the state is working hard to fully implement the Prespa Agreement and expects equal efforts from Greece.

“We expect, with two-thirds support in Parliament, by the end of January 2019, to adopt constitutional amendments that will complete the process in our country and will enable Greece to begin their process of ratification of the Prespa Agreement and the adoption of the accession protocol to NATO. The process of joining NATO is our main focus in 2019. We are also working hard on key reform priorities, which emerged as a message from the European Council in June 2018 as a condition for an effective start of EU membership negotiations in June 2019. We know that implementation is important in the process and we will do everything to ensure it, especially in the area of the rule of law,” Zaev said.

Zaev is on a working visit to Brussels and is scheduled to a hold aworking lunch with the leaders of the Western Balkan countries and the EU High Representative for Foreign Affairs and Security Policy, Federica Mogherini.

Solar energy production must not leave North Macedonia without food