Parliament Speaker, Talat Xhaferi, announced an advertisment for the election of a member of the Council of Public Prosecutors. Xhaferi announced the advertisment yesterday, and today it was published in some of the daily newspapers, and it should be published in the “Official Gazette”.

In the announcement, it says that the election of a member of the Council is needed from the “ranks of university law professors, lawyers and other prominent lawyers”, who will be elected by the Parliament of the Republic of Macedonia. (Parliament elects a total of 4 Council members coming from this group, two of which are from non-majority communities in the country).

The Council of Public Prosecutors, which has a total of 11 members, worked with one member short months after Zoran Sulejmanov retired at the age of 64. The filling of his post for several months was blocked because of the crisis with the constitution of Parliament and the election of parliamentary committees, specifically the Commission for Elections and Appointments.

Otherwise, the announcement of the advertisement for the election of a member of the Council comes simultaneously with the dismissal of the state public prosecutor Marko Zvrlevski and the procedure for appointing a new one, which the government announced will begin on Tuesday next week. 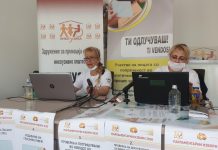