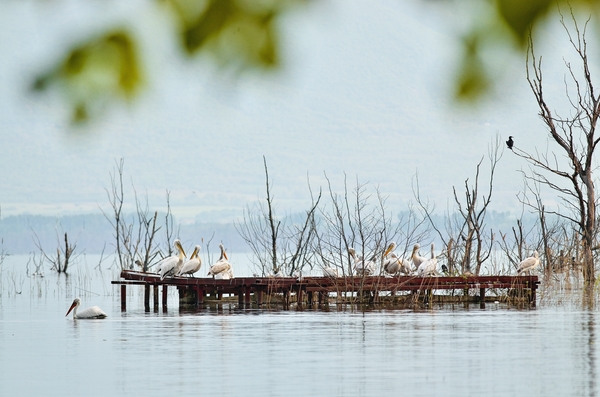 The climate change that is destroying Planet Earth at a galloping speed, but also the human activity that is accelerating, instead of slowing it, is the main reason for the ecological catastrophe that is happening to Lake Prespa. The receding shoreline and the jeopardized survival of the living world in the lake are just few of the problems we are facing with. The disruption of the biodiversity and the need of finalizing the Red Lists for all the species, the water treatment, the pollution of the soil and air, the waste selection and the release of impure energy from fossil fuels, are also issues that should be priority in the long run.

On World Environment Day, which this year is marked under the motto “For Nature” with stress to the biodiversity, the general public expects answers to the ecological issues and initiatives for solving the environment problems. The example with the Prespa Lake, which is proclaimed monument of nature, and tthe natural reserve “Ezerani”, which is a home to many species, is only a drop in the ocean of ecological problems that this country is facing with.

The receding shoreline is more complicated and is a result of many factors, where the people are mostly responsible, said environmentalist Dragan Arsovski of the Macedonian Ecology Society. We know the quantities of water that are entering the lake and the those that are leaking out of it through Galičica mountain as well as the quantities of evaporation, but on the other hand, the quantities of water that are used from the lake for watering are unknown. According to the last managing plan for Prespa Lake, there are thousands of wells that are drawing underground waters and were not evidenced. The significance of underground waters is enormous since it plays a role of a puffer system in case of drought and it needs to keep the level of water in times when there aren’t any rainfalls.

In the past, Prespa Lake has been going through periods of lower water levels and the most critical period was during 2008. Researches show that the lake’s water level varied extremely during its geological history and it was lower than it is today. During the ’70s its water levels began lowering chronically.

“The lake’s natural aging certainly would lead to its vanishing i.e. the process of eutrophication would turn it into a swamp. This means that the current lake habitat would turn into a different kind of habitat – all species depending on open waters would disappear and other species that will inhabit the mud would arrive. It is awful that we are speeding up the process of eutrophication with our activities and we aren’t allowing any space for certain species to adapt to these changes”, said Arsovski.