The former head of the Bulgarian state intelligence agency Dimo ​​Gjaurov, in an interview with TV Nova, commented that one of the goals of Russian President Vladimir Putin with the escalation of the conflict with Ukraine is to force Europe and the United States to open the Nord Stream 2 pipeline. Meanwhile, the partner of EURACTIV Europe Elects, estimates that another reason is the public opinion poll, writes Euractiv, reports Portalb.mk

“Even in a limited conflict, the first thing Russia will do is close the pipeline through Ukraine. By doing so, Russia will try to get Europe and the United States to open Nord Stream 2. This is one of the indirect goals of President Putin’s activities,” Gjaurov said.

According to him, Putin pursues several goals and “will probably link the path to success with some of them.”

The CEO of the state oil and gas company of Ukraine Naftogaz, Yuriy Vitrenko, at a conference in Brussels on December 1st organized by EURACTIVE Bulgaria, said that Ukraine’s position is not to certify Nord Stream 2 because it is not in line with EU rules.

The certification of the controversial gas pipeline project is not expected before the end of the first half of 2022.

For the EU, the fate of the Nord Stream 2 pipeline is linked to any potential conflict with Russia over Ukraine, and Brussels has indicated it is likely to side with the United States.

Germany is ready to discuss closing the pipeline in the event of a Russian invasion of Ukraine, German Chancellor Olaf Scholz said last week, responding to growing domestic and international pressure to halt the project.

Gjaurov reminded that Europe is dependent on Russia in terms of Russian gas supplies. He also commented on Russia’s call last week for NATO to withdraw from Bulgaria and Romania.

“I understand these words as a provocation because there are no NATO units in Bulgaria,” so if it depended on him (on Gjaurov) he would expel the Russian ambassador.

“This is a direct provocation not only for Bulgaria and Romania, but for the whole of Europe, for the NATO countries. We have not witnessed such arrogance for a long time,” Gjaurov said.

According to him, Bulgaria should not respond to Russia’s position by inviting NATO forces on its territory.

“We are a member state. We have signed an agreement that if NATO forces are needed here, they can be redeployed, without our invitation,” he said.

For Europe Elects, as long as there are many factors that determine the actions of the Russian president, there is a possibility that the poll will be part of them.

Europe Elects emphasizes that Russia is an authoritarian regime where elections are rigged, not free and fair. The overall political environment also affects the poll. For example, when voters see opposition members being shot or poisoned, they will probably think twice about sharing their honest opinion with a polling company, either over the phone or online.

In addition, some polling companies are in line with or under the control of the Putin administration. An obvious exception is the Levada Center, which the Russian government designated as a foreign agent under the 2017 Foreign Agents Act. However, given the repressive political environment, what is critical is that opinion polls in Russia do not always represent reality.

However, the Levada Center can offer some interesting insights. Putin came to power on August 9, 1999. Only a few days later, the Second Chechen War intensified. In January 2000, according to Levada, Putin’s rating rose from 33% to 84%. Russia eventually won the war.

The high price of oil has contributed to Russia’s economic stability, following the catastrophic effects of the rampant liberalization of the economy in the 1990s. Putin’s rating remained stable between 65 and 88 percent until 2008. It peaked in September of that year, just one month after the war between Russia and Georgia.

Since then, Putin’s rating has been steadily declining until it reached a new low of 61% in November 2013. Four months later, Crimea was under Russian control, and Putin’s rating rose again to 80%.

The trend is clear: when Russia goes to war, Putin’s rating rises. If Putin holds power, it means stability for the caste around him and the system that benefits from the current situation. In the Russian elite, the threat of war can be considered an effective tool for deterring the country’s problems.

Mismanagement of the coronavirus pandemic and inflation of 6 percent in 2021 gives the Russian elite reason to worry about public unrest. In addition, as the threat of insurgency against authoritarian mismanagement was demonstrated in Belarus, Kazakhstan and Ukraine during the Maidan revolution, this is an additional cause for concern for Moscow. 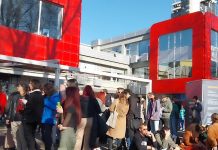