Call of the Synod of the Macedonian Orthodox Church – Ohrid Archbishopric (MPC-OA) to the competent authorities in the state for mercy to the deposed bishop Jovan Vranishkovski, on behalf of “higher purpose”, found its revelation within a short period. After serving three years and two months, i.e. more than half of the five and a half years in prison, Vranishkovski is to be released from prison “Idrizovo” within a week.

The competent authorities received the call, and the express reaction on it raised doubts and raised the question of which authority – judicial, executive or legislative – is familiar with the “higher purpose” and should therefore receive the credit for the Christian gesture of mercy.

The release of Vranishkovski from prison “Idrizovo” is more than certain after the public prosecution for organized crime and corruption agreed with the decision of the court, i.e. that he met the legal requirements for parole.

It’s Christian, but not political to believe that only one side (Macedonia, MOC) will make merciful action without having agreed a counter-service (recognition, autocephaly) by the other side (SOC, ROC).

– I think that Jovan Vranishkovski should have been released from prison much earlier, regardless of the issue of negotiations between MOC and SOC. Without getting into political moments, the action of the Synod for seeking mercy for Jovan is justified. Previously, there were several initiatives of several bishops of MOC for release of Vranishkovski, but there was no response. The moment that Jovan is held in prison for the damage he can inflict on MOC is unjustified and had a frustrating impact on MOC. Among other things, the arrival of Hilarion Alfeyev had an impact. After the call from MOC and the acceptance by the Government, judges had to make an easy decision – says journalist Maksim Ristovski, former cleric in MOC and POA, for META.

– The Government will respect the decision of the court, and it would be best to refer to the body which has passed this decision for the motives, reasons and circumstances that led to this decision, which is the court – said Gjorgjiev this weekend.

Gjorgjiev added that the Government supports all activities leading to overcoming the challenge that the Macedonian Orthodox Church has within its international communication, noting that it would not be appropriate for the Government to comment on the court decision, respecting the ruling trinity of state.

Skopje Criminal Court brought the decision for parole for Vranishkovski, on demand submitted to the court by the warden of prison “Idrizovo” on 25th of December 2014.

As the media reported, the demand stated that Vranishkovski served more than half of his sentence, showed good behavior in prison and therefore met the requirements for parole.

Two months earlier, at the official web site of the Serbian Orthodox Church (SOC), a letter of Vranishkovski, addressed to the Director of the execution of sanctions, was published. In the letter, the deposed bishop writes about his treatment in “Idrizovo”. 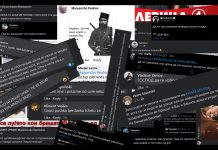 Hate speech and harrasment campaign against Metamorphosis staff continues with impunity: “Should we shoot them or bring funeral wreaths to their homes?”

Analysis: In the IT sector in North Macedonia, the gap between men and women almost non-existent

Macedonian Railways having difficulties with maintenance of the Chinese trains, timetable barely functional