The German Defense Minister, Ursula von der Leyen at the meeting with her Macedonian colleague, Radmila Shekjerinska in Skopje, stated that Macedonia and Germany share the same values and that “we should continue to build Europe together!” also stating that this country has a unique opportunity that has to be seized.

-From our experience with the unification of Germany, I can say that these opportunities are unique and that should be seized. I want to say that I’m talking about a united Europe and that we want to build Europe together with you – said the German minister who also said that Macedonia and Germany share the same values – democracy, the rule of law, the dignity of individuals, the right for free expression.

After the meetings at the ministry head offices, Shekjerinska said that the frequent visits of the highest German leadership, Chancellor Merkel, the Minister of Foreign Affairs, Mas and the Minister von der Leyen, show that Germany is a sincere, consistent and true friend of Macedonia.

-We recognize the German leadership even today, when we are receiving a serious, sincere, and open support just when Macedonian citizens are about to decide for their country, for their future. We saw this leadership at the previous NATO summitt when Macedonia received a strong support to be granted the longawating invitation for a membership into the Alliance – said Shekjerinska. 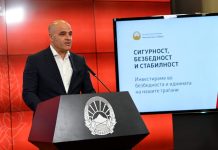