Shots are fired in Kumanovo this morning as well. Around 7 am, police had another shootout with an armed group in “Diva naselba”.

According to the media, three policemen, who were urgently transferred for treatment in Skopje, were wounded in the shootout this morning.

Police are still blocking all entrances of the settlement, and residents of that part of the town are left without electricity this morning.

Kumanovo residents say that this morning, between 6:30 and 7:30 am, short bursts and detonations were heard in the city, but that it was peaceful now.

MOI announced that the action was for the elimination of a larger terrorist group composed of people from the country and a neighboring country which aimed attacks on state institutions.

No information on civilian casualties.

The action in Kumanovo began yesterday morning about 4:30 am and lasted throughout the night and this morning. 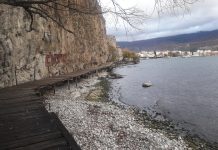