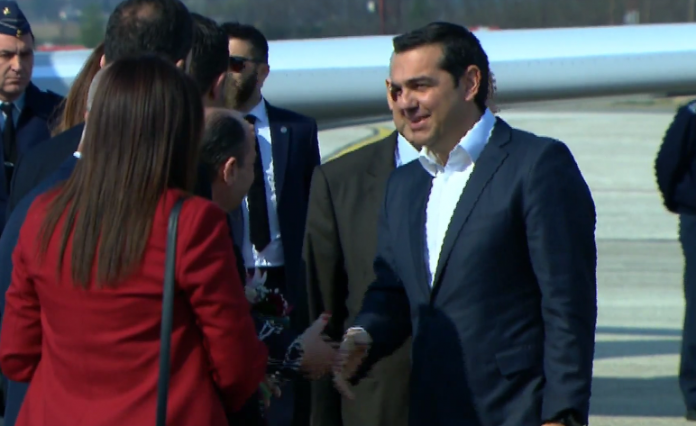 Tsipras was greeted at the airport by the Embassy of Greece’s employees and the Vice Prime Minister Radmila Shekjerinska.

The Greek Prime Minister’s main meeting will be with his Macedonian colleague Zoran Zaev with whom they managed to achieve the Prespa Agreement, an act that managed to solve a 27-year long name dispute between both countries.

The Greek delegation will be greeted officially with the highest state honors at the Government’s plateau. After several short bilateral meetings between the prime ministers and the ministers from both governments, an intergovernmental session will take place and it will be followed by a joint press conference between prime ministers Zaev and Tsipras.

Near the gate at the building of the Government, a trilingual board was placed which had the country’s new constitutional name written on it, Republic of North Macedonia, written in Macedonian, Albanian and English language, with which the Government has managed to align both with the Prespa Agreement, the Law on languages, for the use of Albanian language in state institutions.

Afterward, Tsipras will visit the Parliament for a meeting with the President of the Parliament, Talat Xhaferi, and at the end of the visit, both prime ministers will open the business forum. Greek media reported last week that Tsipras will arrive in Skopje accompanied by 70 businessmen.

The official Greek delegation featured high representatives of Greek companies from the energy sector, constructions, industrial products, and high technology, that see there is a space for investments in North Macedonia. During the visit, several bilateral agreements in a number of areas will be signed.

Due to the country’s visit by Greece’s Prime Minister, Alexis Tsipras, MoI informed that in the period between 9.30 and 20.00h several measures for special traffic regime in the central Skopje area will be applied.