Truthmeter.mk published the original text. Meta.mk is republishing it below under the syndicating agreement:

Janko Bacev’s openly pro-Russian non-parliamentary political party sent a statement to the public entitled “United Macedonia to DS, LDP, DOM and VMRO-NP: If you really want one constituency, seize the chance given by VMRO-DPMNE.”

They call on the Democratic Union led by Pavle Trajanov, the Democratic Renewal of Macedonia with Maja Moračanin, the Liberal Democratic Party with Goran Milevski and the VMRO-People’s Party with Ljubčo Georgievski to support VMRO-DPMNE’s proposal to abolish the so-called “Pržino Technical Government”. This, as the pro-Russian party says, “opens the way for amending the Electoral Code with one constituency.”

United Macedonia then spoke on behalf of the largest opposition party, saying that “VMRO supports one constituency if these parties are encouraged and support early elections.”

VMRO-DPMNE puts pressure daily on smaller parties that are part of the ruling majority which currently has 64 MPs. The smaller parties all have five MPs together and if the pressure from DPMNE and the pro-Russian United Macedonia succeeds, the government will fall. 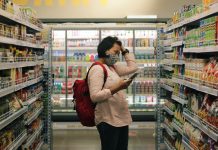