The chief of the Austrian diplomacy and president of OSCE for 2017, Sebastian Kurz, tomorrow will be visiting Macedonia officially and during the visit, he will be meeting his colleague Nikola Poposki.

According to his agenda, which was released by the Ministry of Foreign Affairs (MFA), Poposki and Kurz, tomorrow at 13.30, will be visiting the border stone 59 at the Macedonian-Greek border crossing near Gevgelija, which is one of the locations on the so-called Balkan migration route.

At 17.50, a meeting between two ministers in planned, and 20 minutes later i.e. at 18.10, according to the agenda, a press conference will be held.

On the 1st of January this year, Austria took over the yearlong presidency with the Organization for Security and Co-operation in Europe (OSCE). 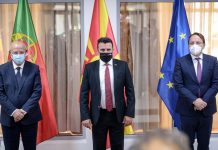