Today the “Colourful Revolution ‘continues in 13 cities across the country.

The protest in Skopje starts at 18:00 in front of the Special Prosecutor’s Office, and today protesters will be bringing attention to the economic situation of the state and its borrowing.

“I protest because Macedonia is a poor and dilapidated land, even though it can be an economic success story! Macedonia is a poor country because it is run by crooks who steal publicly, they steal what is ours, they are stealing our future! This government has put every household in Macedonia in debt by 4455 euros, and for each of us, 1.240 euros. These figures will only increase! Everyday they stay in power, we get poorer and more in debt! The money they borrowed is not spent on our needs or to improve the economy, but about their desires and pleasures, their monuments and facades, and a large amount of that goes into their pockets and bank accounts in Belize! That’s why, protest and demand accountability for this – or in their words – Insane rule! ” Reads the Facebook announcement of the event organized for today.

At 18:30 protests will begin in Veles and Ohrid, Strumica and Prilep will start their protests from 19:00 and Valandovo from 19.30.

Citizens, united under the “I protest” movement, are demanding President Gjorge Ivanov withdraw his decision to pardon and to resign. They also want to form a special unit of the Criminal Court for the cases from the Special Public Prosecutor, and to withdraw the decision to hold early parliamentary elections on June 5th. Other demands include the involvement of civil society associations and organizations in resolving the crisis and the formation of an interim government.

Shekerinska reacts to Karakachanov’s “regiment”: The communication between allies shouldn’t be in this manner 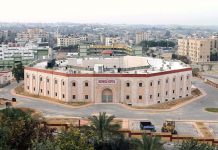