The court hearing about the deadly fire in September 2021 in the modular COVID-19 hospital in Tetovo, North Macedonia, yesterday was postponed for the second time. Fourteen people died in the incident.

Two of the defendants, Dr. Boban Vuchevski and the hospital’s former Financial Director Artam Etemi, appeared in the court without attorneys to represent them. Even though they had two months to find a legal representative, they stated that they didn’t know they will need an attorney, informs Portalb.mk.

The next hearing about this case that is led by Judge Jordan Velkovski is scheduled for the 8th of November.

After the hearing was postponed, Etemi and Vuchevski didn’t wait to answer questions posted by journalists, instead they immediately left the Court.

In the meantime, Besimi said that he will prove his innocence in this case with the facts.

“I told you the last time, and I repeat, please continue with the hearing because I believe that with the facts that will be proven, I will prove my innocence about this tragic event. There is undisputed evidence that we shall reveal during the trial.  I hope that the process will start and end soon,” said Florin Besimi.

At the previous hearing that was postponed for today, the hospital’s former financial director Artan Etemi and the COVID-19 Center’s Manager Boban Vuchevski were missing. Only the former director of the hospital in Tetovo, Florin Besimi, was present,

Florin Besimi and Artan Etemi are charged according to Article 292, regarding Article 288 of the Criminal Code, about a felony that is jeopardizing general safety.

Four forensic evaluations have been conducted so far. The first was conducted by the Ministry of Interior, which stated that the fire started due to a short circuit of the extension cable during a reanimation of a patient.

The second was conducted by the Technological- technical faculty, but no details are known about the findings. The third forensic evaluation for the hospital installations was done by an electroengineer.

At the fourth, which was a German forensic, the prosecution said it didn’t differ much from the findings of the experts from the Sector for the control of forensic evaluation.

The fire in the modular hospital in Tetovo, which still hasn’t been removed, happened on the 8th of September 2021. 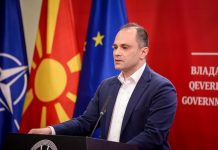