During some of Macedonia’s most crucial moments, President Gjorge Ivanov was a man of cancellation and abolishment. When he should have gone, he did not go, he returned when he should of stayed, he did not sign or was absent, but one sure thing, he will not vote.

When an armed shootout broke out in Kumanovo on May 9, 2015, Ivanov was busy enjoying the May 9 celebrations – the Day of Victory over Fascism, in Moscow. The next day, when the situation became more transparent, he eventually returned to the country.

That year, representatives from NATO member-states were absent from the Moscow parade, as well as other candidate countries, in protest of the aggression against Ukraine.

In the police crackdown on an armed terrorist group in the Kumanovo neighborhood of “Divo Naselje”, 8 policemen were killed. The events in Kumanovo took place during a period of serious political crisis in Macedonia and it was during this period when, beginning on May 5, anti-government protests began in earnest.

On April 12, 2016, Ivanov announced that he had decided to sign an amnesty for all politicians who were under investigation by the (Special Prosecutor’s Office) SJO. In the wake of the beginning of one of the biggest scandals and crimes in Macedonian history, Ivanov declared an amnesty for 57 people, and with that, he obstructed, complicated and challenged the entire effort for the criminal and judicial persecution of the perpetrators.

On June 6, 2016, after a series of tense meetings, Ivanov was persuaded to annul the amnesty.
According to him, “unlike April 12, today there is a new reality in Macedonia and at a time of external threats and security risks, we have functional institutions that can cope with these challenges.”

On March 1, 2017, Ivanov would not give SDSM leader Zoran Zaev a mandate to form a government. Despite having won sufficient votes and having assembled a coalition, Ivanov refused to give him the mandate to form a government under SDSM leader Zoran Zaev. For Ivanov, the deadlines and negotiations regarding “foreign platforms” were questionable. This move led directly to the events of 27 April 2017 when lawmakers and journalists were injured in a violent incursion in Parliament leaving the whole country on the verge of an international and inter-ethnic conflict.

However, on May 17, 2017, Ivanov finally gave Zaev a mandate, but not before a meeting on May 1 with US Deputy Assistant Secretary for European and Eurasian Affairs, Hoyt Brian Yee, where he called for guarantees “to strengthen the unitary state of the country and that everything will be in accordance with the Constitution of the Republic of Macedonia”. He then assigned Zaev a mandate to form a government.

On January 17, 2018, Ivanov would not sign off on the Law on the Use of Languages. Ivanov says that the law is “unjust and repressive and favors only the Albanian language.” According to Ivanov, “this law introduces a very expensive parallelism in all organs of state power leading to their complete blockage and dysfunction.”

On June 26, 2018, Ivanov did not sign the law on the ratification of the agreement with Greece. Ivanov believes that “he has no mandate to sign the Decree for a Proclamation of the law on ratification, because one of the tenets’ of his own policies in the 2014 election program, was that he did not accept any changes to the Constitution in order to change the constitutional name.” 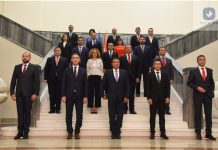 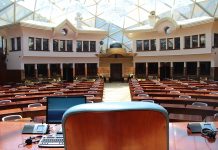