Today the North Atlantic Council adopted a unanimous political decision to list Macedonia’s NATO invitation at the NATO summit in Brussels on 11 and 12 July, Prime Minister Zoran Zaev told parliament today during his closing speech before ratification of the agreement with Greece on a solution regarding the name dispute.

“I received this happy news a few minutes ago, let me share it with you. This is something that is a centuries-old aspiration for the generation before us, as well as all of us”, Zaev said.

Earlier, NATO Secretary-General Jens Stoltenberg announced that an invitation for Macedonia’s membership to the Alliance could be recommended for the summit that will be held in Brussels on 11th and 12th of July, after Skopje and Athens have reached an agreement concerning the name dispute. 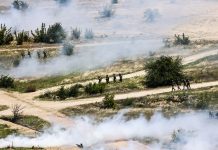