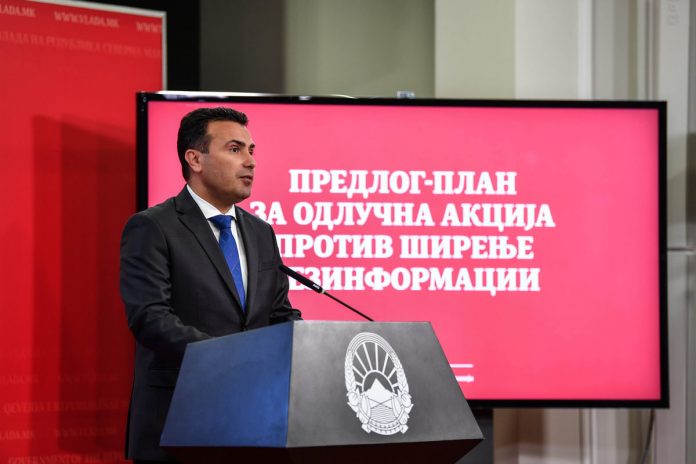 Disinformation is one of the main challenges for democracy in 2019, and is a tool that is used for manipulation of citizens, interference in election processes and to decrease the trust of the citizens in the institutions and the media, said today Prime mInister Zoran Zaev when he presented the Draft plan for a decisive action against spreading disinformation and attacks on democracy.

On several occasions in the past few years, the Republic of North Macedonia has faced with the massive widespread of disinformation both on social and traditional media. Part of the disinformation was spread from territories of other countries as well. North Macedonia was marked as the fake news country when in 2016 it was revealed that a lot of fake web pages and Facebook profiles that spread disinformation in the US during the presidential elections were managed from Veles,” Zaev said.

He also said that the draft action plan is a sublimate of recommendations in the fight with disinformation, prepared as a result of following the recommendations provided by the European Commission, the Committee of Experts for Qualitative Journalism at the Council of Europe, through the membership in the Committee on part of a representative of the presidential office of the RNM’s Government, NATO’s Communications Sector, the collaboration on the communications’ professionalisation and PR with the British government, collaborations with USAID, the European network of digital diplomacy supported by the US Department of State, through the membership of the managing board of the network on part of a representative of the prime minister’s office, etc.

The draft action plan will be put for a discussion at the institutions’ working meetings including consultations with the civil sector, the media and various actors in the society, including RNM’s strategic partners.

The Action plan includes two types of security measures and proactive measures. The security measures, among the other, predict the “revision of the current and the creation of new inner security protocols for communications in the institutions and communication with outer subjects with the goal of decreasing the possibilities of leaking sensitive information”.

The introduction of a security protocol for digital information for all civil servants, for the safe use of the internet, the company’s email, mobile phone et. Strengthening the inner IT infrastructure of the Government and the ministries and checking the control system of the network traffic with the goal of timely prevention of outside attacks on the infrastructure. Change of prime minister’s telephone and mobile phone numbers including the implementation of a security protocol for digital communications” said Zaev.

In the proactive measures of the Action plan, the Government will be publishing official responses to questions posted by media and citizens, in order to prevent the misuse of Government’s official stances.

“The government will form an Action group to fight disinformation and attacks on democracy, where representatives of the offices of the Prime Minister, the President, the Parliament, the Minister of Communications, Transparency, and Accountability, MOI, MD, MFA, the Direction of Security and Counter-Intelligence, the Intelligence Agency and others, will be invited, and whose task is to be the analysis and monitoring the forms of disinformation of the general public and coordination of the fight against the spread of disinformation, said Zaev,

The Government will also open a discussion with the media in order to determine a model for the support of the production of media content on the subject of fighting disinformation including support for educational programs and training intended for media workers with the goal of their professional attuning in the fight against disinformation.

The Government and the institutions will be actively collaborating with all organizations and projects that are working on the fact checks through timely and quick replying to their questions during the fact checks. The Government will initiate that the organizations that are doing the facts check to create a register for determined and revealed disinformation and a list of sources that spread disinformation. RNM will instigate a collaboration with the European Commission and will request to be included in the Rapid Alerts System for the spread of disinformation with the goal of exchange of information regarding the content and the subject of the disinformation campaigns in Europe” said Zaev.