According to the government’s forecasts, the benefits of this investment are manifold – from opening new jobs, exporting high value-added products, transferring knowledge and technologies, mapping the country for the foreign investors in this sector, to contracts and additional work for the local companies.

The vice PM Artan Grubi on his Facebook page announced that the cornerstone will be laid on the anniversary of the Ohrid Framework Agreement, on August 13, in the TIDZ Tetovo. In the initial phase, 900 jobs will be created.

Environmental tax on fuel stranded in Parliament of North Macedonia, number of diesel vehicles has risen by 160.000 in 8 years 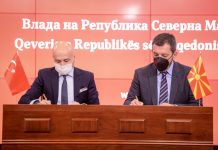