Meta.mk
World Balkans The driver of the bus that turned over near Leskovac drove at... 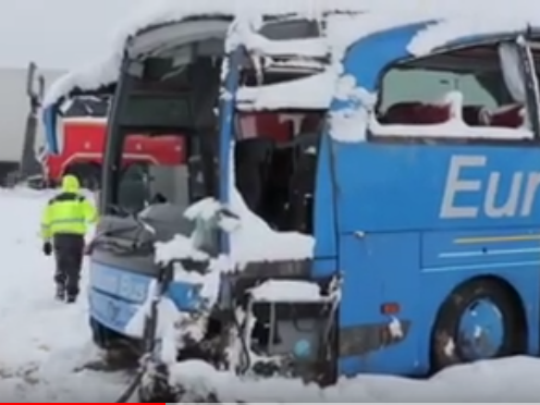 The unadjusted speed in relation to the road conditions when the bus drove 100 km/h was the cause for the tragic accident of the Macedonian bus who turned over near Leskovac, Serbia when three persons got killed and 32 were injured, inform Serbian media, according to investigation sources.

According to the survivors, the bus began to move uncontrollably and turned over at the village of Brestovac, near Leskovac.

The heavily injured were visited last night by the Macedonian Minister of Health, Venko Filipche.

Serbian media also report that the driver, who is a prime suspect about the tragedy, was arrested.

-According to available information, it is suspected that the driver drove with a speed of around 100 km/h even though the road was covered with snow and was slippery, which caused the accident – said the source of the investigation for Serbian media outlets.

As was announced by Minister Filipche, 8 patients are put in a hospital in Leskovac and they would be sent to Macedonia for further treatment either today or tomorrow. In Nish are hospitalized patients with more serious injuries, that are under constant care, and two of them may need to be operated. Also, it may be decided with the colleagues of the clinical center in Nish whether these people will be operated on there or they will be transferred in Skopje.

A large number of First Aid and firemen from Leskovac and Nish have arrived quickly at the location where the accident had happened.