The ultimatum that was issued during last week’s protest by the students in Tetovo to the Tetovo university is passing silently. Neither side is accepting to clear out in order for the general public to find out what has happened to the student’s requests i.e. whether someone would heed them, asks Portalb.mk.

Even though they aren’t mentioning publicly any names, but the organizers of the protests and some protestors have confirmed for Portalb.mk that they are coming across to various pressures even with greetings for the families of those that are protesting in order not to continue to request their rights.

This culture of putting fear inside has forced the students to silence and to silently accept their defeat against the system that they have deemed as corrupt and damaging for their future.

It is interesting that, instead of criticizing the responsible, the students directed their criticism toward the media. Because of that what followed was the last publishing of information at the last page where the protests were announced. A week ago they were loud and gave the impression that maybe they will be massive and serious as those that occurred in Albania.

“The students’ movement has no document called Ultimatum, but they have requests issued to universities, the ministry and the government. The titles that began to appear in the media can be seen only as acts by individuals that are burning our demands, including a keeping a distance from the political parties from this cause!” stated the unusual press release that was issued on the 23rd of December, that arrived from their chaotic organization.

On the other hand, apart from the press release issued by the Tetovo University that there will be an online platform for the students through which they will be able to “articulate their needs, demands and their problems that will be discussed with utmost seriousness by the organs of the academic units and the University,” not a word was said about the student’s requests. 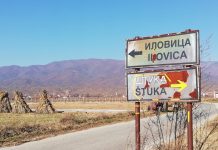