The Criminal Council of the Basic court Skopje 1 has rejected the complaint filed by Special Public Prosecution over the decision made by the judge upon a previous procedure not to confiscate the passports belonging to the current Minister of Culture, Elizabeta Kancheska-Mileska and another person that is also a suspect in the case codenamed “Tenders.”

Apart from the confiscation of the passports, the SPO demanded that the court order the two suspects to report to the court once a week. The court rejected both precautionary measures that were requested by SPO.

The Minister of Culture is the prime suspect in the case regarding the misuse of tenders for the execution of construction works at the Museum of VMRO, which is a part of the project “Skopje 2014” that, according to the SPO, has caused damage to the state budget by 54 million denars.

After being questioned on the 28th of October, Kancheska-Milevska announced that “this is a political theatre organized by the Social Democratic Union with the assistance of the Special Public Prosecution in order to provide support for this party in the pre-election period.” 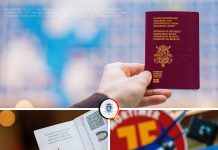