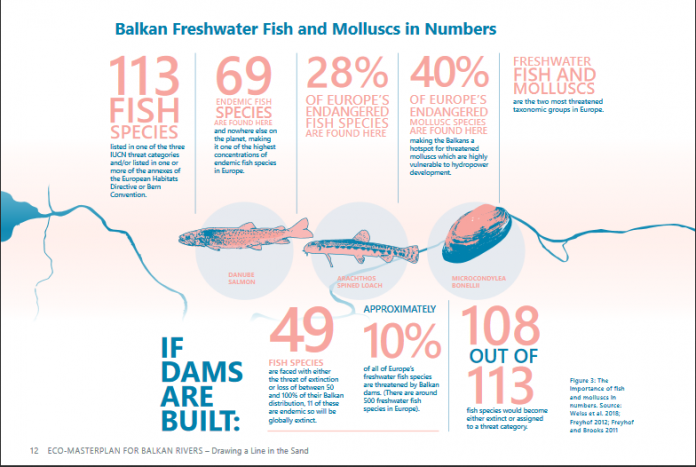 Three-quarters of the rivers in the Balkans region are ecologically so valuable that they will have to be protected from the building of hydroelectric plants. This was the conclusion from the “Eco-master plan for the Balkan rivers” made by the international ecological organizations “Euronature” and “Riverwatch” that was promoted at the international conference “Hidroenergtic projects and the protection of nature – challenges and solutions” in Skopje.

For the needs of the research, 80.000 km of rivers in the Balkans’ region were evaluated, where it was concluded that 61.000 km of the rivers or 76% are of exceptional significance as natural values because of which they will have to be declared as “no-go” zones i.e. protected areas. The study was in accordance with the EU’s strategy of biodiversity and the EU’s Directives for protection of birds, habitats and waters.

The study suggests the Balkans’ states that it is necessary for them to change their energetic strategy and that these are achievable goals in accordance with the EU’s directives for the production of 25% of the energy from renewable sources if they divert toward other renewable sources of energy that have less influence on the living environment such as the sun and the wind.

According to the study carried out by Euronature and Riverwatch. the biodiversity of all these rivers is endangered and is on the verge of collapsing if the projects are accomplished because there won’t be any river left that will not be endangered. Hundreds of animal species and plants are going to be extinct and by building the hydroelectric plants out of 500 types of fish that live in the rivers of Europe 49 types of fish would be extinct or 11 will be extinct.

Macedonia plans to build 160 hydroelectric plants where 130 rivers and other streams would be affected. So far, 50% of the country’s total potential has been used. Still, the experts warn that even if these minor hydroelectric plants are built, Macedonia, as the remaining Balkan states will not be able to reach EU’s target of 25% of energy produced from renewable sources by 2020.