On the recordings, it is heard how Stavreski characterized his fellow ministers, mayors and government officials on an improper way.

– This was done under the order of one man, Prime Minister Nikola Gruevski – stated Zaev.

He said that conversations were about the rebalancing the 2012 budget and the adoption of the 2013 budget.

In the first four audio recordings, conversations between Stavreski and Jankulovska are concerning inappropriately spent money. Stavreski complains that money are spent on megalomaniac works, and Jankulovska suggests that there are no money and recommends Stavreski to reduce wages.

Jankulovska also talk about the situation in the Municipality of Centar and misconduct of police. She admits that officers are sleeping on “iron beds and cover with blankets reading “JNA”, and that she constantly receives threats from EVN for unpaid bills.”

The following audio recording today announced by Zaev is a recorded conversation between Stavreski and Jankulovska talking about Bitola Mayor Vladimir Talevski, and his crime with transport of students. In one part of the recording is heard how Stravreski says for Taleski: “Instead of covering his crime, the bastard asks us to cover his debts through ZELS. Bastard plays extremely nasty. He is incapable, criminal, but he also acts, bluffs, wines…”

In another audio recording, according to the leader of the SDSM, it is heard a conversation of two ministers concerning the Director of Lottery of Macedonia and messages Stavreski received from Gruevski for that scandal.

Jankulovska at one point says: “When I see this, the term used by the communists – crazy – literally applies for him.”

Zaev claims that in the last published recording, while talking to Jankulovska, Stavreski recognized debts and unreasonable loaning.

Two audio recordings which Zaev announced on today’s press conference are, according to him, conversations between Jankulovska and Stavreski for the problems they have.

“Well, Gorde, tell me if I’m crazy or if I don’t know what else to think …”, is heard on one of the published audio recordings.

“He wrote me a message to do illegal things. I wanted to bash the phone to his head,” says Stavreski to Jankulovska on the recording.

In another conversation, Stavreski talks about the meeting between Gruevski and the EU Ambassador to Macedonia Aivo Orav, and called Ambassador with abusive words.

In reply to journalists’ questions regarding the case as murder at Smilkovo Lake and Harun Aliu, Zaev said that there is “no information about contract killings”, but that there are materials for murders.

He recommended the public to be patient because the whole truth will be revealed step by step.

Zaev added that they will publish everything they have, because, as he said, “with such people, if something is hidden, Mijalkov has the same and will use it against us.”

Asked what kind of a resolution is expected, Zaev replied that this is the biggest political crisis since the independence of Macedonia, but he expressed hope that Gruevski “will not make a mess,” referring to the statement of the Central Committee of VMRO-DPMNE. Zaev said that “the end of the dictatorship regime is coming to an end” and that “there won’t be, nor he expects, a legal outcome of this crisis.” 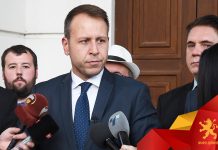