The Special public prosecutor’s office is withdrawing the bill of indictment for the “Putsch” case that indicted SDSM’s leader Zoran Zaev and the former Head of Security and Counter Intelligence Agency, Zoran Verushevski.

As was informed by SPO, the reason for this decision is that the “facts” that were shown in the indictments are in contradiction with the evidence that they have at their disposal” and with the findings of the Prosecution during the investigation procedures for “Target” and “Fortress.”

For this decision, stated the announcement, the SPO will notify the Basic court Skopje 1 with a written notice.

-This public prosecution during this day will send a written notification to the Basic court Skopje 1 Skopje where it is stated that it is withdrawing from the bill of indictment for the case known to the public as “Putsch” because the facts that are shown in the conviction act are in contradiction with the evidence that this public prosecution has at its disposal and the findings in the investigation procedures for “Target” and “Fortress” – said SPO.

According to them, the goal of this decision is to “gather additional evidence that will completely clear out the current situation and will allow for making a correct and lawful prosecutor’s decision.”

-We would like to explain further in order to clear out that in terms of professional working we cannot represent a bill of indictment that is contradictory to the evidence that we have at our disposal and the investigations that are opened on our part. At the same time, we are stressing that by withdrawing from the indictment in the “Putsch” case we aren’t prejudice whether someone is innocent or guilty, but we think that for a complete and correct determination of the situation, additional evidence is necessary that cannot be acquired during the phase of the main disquisition – stated the SPO’s press release.

Otherwise, the charges for the “Putsch” case was lodged by the Public prosecution for prevention of organized crime and corruption on 1st of May 2015. Apart from Zoran Zaev and Zoran Verushevski, Sonja Verushevska, Branko Palifrov, and Gjorgji Lazarevski are also indicted. According to the indictment, they are indicted for espionage, illegal telephone tapping and violent acts against representatives of the highest state organs.

The jurisdiction over this case, at the end of 2015, was taken over by the Special Prosecutor’s Office since it’s a case that is connected and has resulted from the illegal surveillance.

Even though there were many attempts, the court trial for the “Putsch” case never started.

The “Putsch” case was announced on the 31st of January 2015 when the Ministry of Interior filed criminal charges against SDSM leader Zoran Zaev for violent acts against high ranking officials and representatives. 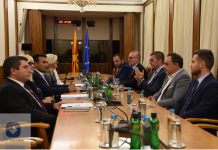 Zaev and Mickoski didn’t cut a deal about SPO, the leadership meeting is a failure

VMRO-DPMNE demands Janeva, Fetai and other members of SPO to be removed by a law