Three projects in three municipalities in Skopje are united in one thing – they all have a primarily decorative function.

Park of lakes in Aerodrom, the Bohemian street in the Centre, and the Delfina Square, although in different municipalities, they have a common denominator – high costs and the constant boasting with why and how much of our money was spent by their mentors.

Municipalities in Skopje in recent years have invested a lot of money into making public spaces more beautiful and have spent hundreds of thousands or even millions of euros and it is about who will make their neigbourhood nicer, or a more expensive square, park or walkway.

But if there is money, does it have to be spent? 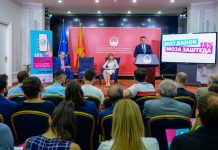