Six out of the eight causes of soil degradation result from the agricultural practices. The overuse of chemicals and the inappropriate tilling and other soil cultivation destroy one of the most important natural resources, that together with the clean air and drinking water, must be preserved. The healthy soil is irreplaceable and essential to sustain life and produce safe food. On the other hand, as a resource, it is being seriously hit by climate change and can easily be destroyed, while its natural characteristics and the biomass renewal capacities are limited.

Nevertheless, the care for the soil in North Macedonia is very low, experts and farmers agree. Urgent measures are necessary to preserve it, and proper education of the agricultural producers about the pesticide and other chemicals’ use and the strict quality monitoring and laboratory analyses, is a must.

The decrease of the organic matters in the soil, the erosion, the contamination, the salinization, the degradation of the biodiversity and the packing down are among the main reasons for the soil’s degradation caused by agriculture that were pinpointed by the European Union. The professor at the Faculty of Agriculture and Food Production, Tatjana Mitkova, says that the problem with the destruction and the pollution of this natural resource is grave, but it could escalate more if the erroneous management of this resource continues.

“The farmers don’t do previous control of soil’s fertility and often they improperly use mineral fertilizers and chemicals for protection of the plants. The fertilizers, especially the nitrogen fertilizers, that the soil doesn’t have mechanisms to contain, end up in the underground waters and pollute them. Fortunately, our producers, due to the current dire financial situation they are in, aren’t using the same quantities as the farmers in developed countries do, so the soil’s contamination isn’t drastic. Still, that doesn’t mean we don’t need education and change of habits,” Mitkova explains.

In the past several years, a change of the practices of the younger farmers has been evident, especially among those who opted for organic production. They are conducting regular monitoring of the soil and are seeking recommendations which products to use in to avoid polluting the soil. According to the data from the Ministry of Agriculture, the total area of organicaly cultivated soil in the period from 2016 to 2020 has increased from 3,240 to 3,975 hectares, and the number of organic producers has risen from 533 to 908.

Susana Dimitrievska from the village Mustafino in the Ovche Pole area has been producing organic food for more than 15 years. She says that the process of starting this type of production is much easier now than before, which should encourage the farmers.

“More than a decade ago there was just the Law on Organic Production and nothing else. Now all kinds of regulations were adopted, the products that can be used are known, the use of conversion has been adjusted and there is a solid expert knowledge that can lead the process. There are certification companies and the subsidies that the state is granting are good,” Dimitrievska explains.

On the other hand, the fact that this type of production is the most efficient solution for saving the soil from pollution and degradation, can serve as additional motivation, she says.

In the last several years, organic production has become a trend especially among younger farmers and there are companies that are processing only organic products, which makes them attractive on the market.

According to the National Program for Agriculture and Rural Development, the support for the organic production is 30% higher than the subsidies for conventional cultivation of forage crops, 50% higher for the agricultural crops, cattle raising and beekeeping, 70% for fruit production and vine and 100% for garden crops.

The producers also receive assets to cover half of their expenditures for organic production certification and 70% of the expenditures for conducted agrochemical, pedological analyses or analyses of pesticides and heavy metals residues and other matters in the soil or in the organic products. The subsidies also got increased from MKD60 million last year to MKD104 million this year.

Of all the types of danger for the soil, this approach to agricultural production will help most to avoid contamination and compacting of soil, since the use of chemicals is avoided and reduced cultivation of the land is implemented. According to Prof. Mitkova, the correct implementation of the good agricultural practices means that farmers who look after the plants are also looking after the soil, as well.

“If the house is built from the ground up, then when one farmer is investing a large sum of money into a plantation, the first step should be to examine the soil and its quality. Then he will have to apply correct fertilization and reduced cultivation, which means that several activities in this instance are compacted into single operation of the mechanization. With perennial plants, grass is planted between the lines that are naturally enriching the soil with nitrogen and are instigating the microbiological activity in the soil. As a result, they are protecting it from erosion and are improving soil’s structure,” Mitkova explains.

The Ministry of Agriculture produced a National Strategy for Agriculture and Rural Development 2021-2027, which is a strategic document for the development of organic agricultural production. They said that they plan to increase the producers’ knowledge about the availability of the protective assets by publishing a list of approved products, but also conducting research on the potentials of the natural resources and protected areas for organic agricultural production in the country. 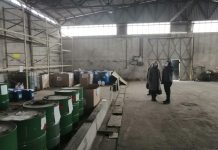 Extraordinary inspection in OHIS: The stockpiled hazardous waste has to be removed in a period of three years

Due to the coronavirus, seven countries have to issue new permits for export of OHIS chemicals