The Minister of Defense, Radmila Shekjerinska, at today’s press conference elaborated the defense budget for 2019, which after a 10 year fall, for the second year has been increasing and this year it will be 135 million euros.

She also said that the government will not back down from the plan for an increase of the budget for each year by 0.2 percentage points of the GDP and that will be shown with the budget for 2019.

“The budget is for development and is reformatory, with a purpose of improvement of the equipment, the working conditions for the members of the army and is supportive for the accomplishment of Macedonia’s strategic goal. the NATO membership” said Shekjerinska and said that one of the biggest categories in the budget is the ite that refers to goods and services i.e. 30 million of euros for the acquisition of uniforms that is currently underway, but it will be paid from the next year’s budget, the part that refers to the delivery of boots, food, spare parts, training and education of the members of the army. 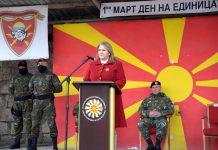