VMRO-DPMNE fears the three great points of the Przhino Agreement, the”bombs”, an investigation into all atrocities and the loss of the Ministry of Interior (MOI). These were the key points of SDSM’s debate in Bitola where Vice President of the party, Radmila Sekerinska spoke.

If VMRO-DPMNE really believes in the peoples support why do they keep running away from a Provisional Government asked Sekerinska from Bitola.

“It turned out that the government is afraid of the big three points in the Przhino Agreement. They are afraid of the “bombs” because they are a living truth about our Macedonia. They’re afraid of any investigation of any misdeeds the bombs revealed because by law, the whole current leadership should go to jail for 10 to 20 years. Thirdly, VMRO-DPMNE will give anything but the Ministry of Interior, because the MOI was turned into party puppet”, Ms Sekerinska summarized, and said that due to these few key issues “on October the 19th it will become clear which party will be running from elections in Macedonia, and that’s VMRO-DPMNE and Nikola Gruevski”.

Radmila Sekerinska said it is undisputed that there is fear in Macedonia, but it is time they moved on.

“Up to this year, citizens were afraid of their Governments power, after the bombs and the “truth about Macedonia”, and the messages from the International Community, fears on Ilindenska grew. That is why when flying an aircraft with guns the truth comes to light”, said Vice-President of SDSM, adding that VMRO-DPMNEs system is crumbling from the inside, because their party members carry folders into the SDSM building just to save themselves. 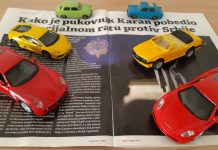