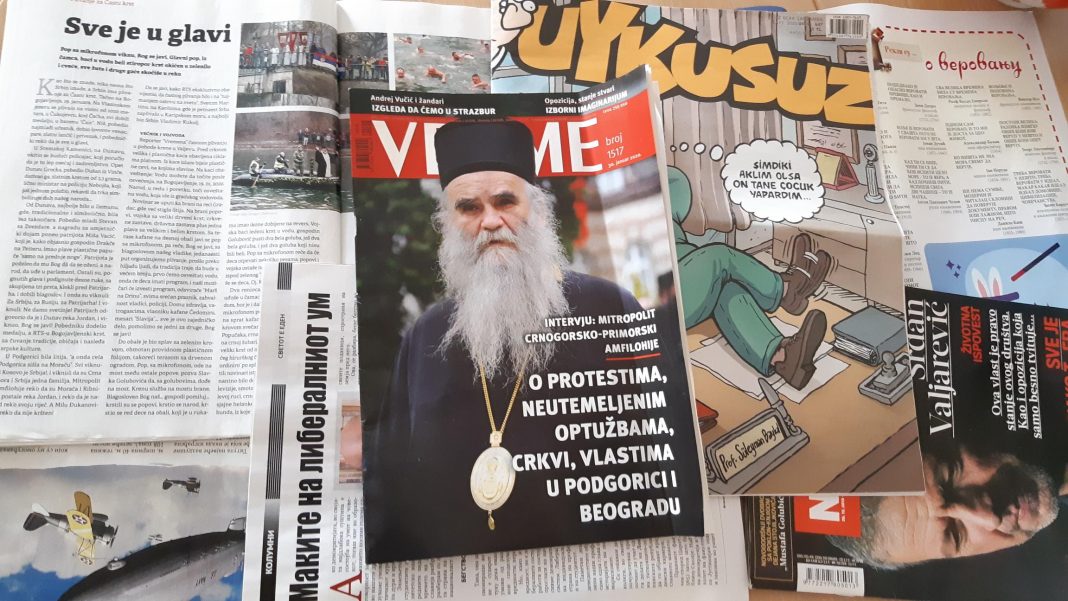 The Serbian newspaper Vreme published an interview with bishop Amfilohij, the current Metropolitan bishop of Montenegro and the Littoral. While most of the interview refers to the current situation in Montenegro, it also contains a statement regarding the dispute with the Macedonian church, MPC-OA.

In the main part of the interview, Amfilohij accuses Montenegrin authorities for causing problems with the Law on Freedom of Religion and Mass Protests, stating that the Metropolitanate of Montenegro and the Littoral will accept the offer for starting a dialogue only when the law is abolished.

When asked by the journalist whether he regrets some of the strong language he has used in the past, the bishop answered that he is conscious of the mistakes from the past and that he has said heavy words for which he begs to be pardoned by those that were insulted by them.

Also, when asked what would the Serbian Orthodox Church – SPC’s next steps be regarding the government of North Macedonia’s official visit to Archbishop Bartholomew, the Ecumenical Patriarch in Istanbul, Amfilohij said that this should be taken into consideration.

Even though several Serbian media outlets had been spreading sensationalist disinformation about this visit and representing it as a part of Western conspiracies which goal is to destroy Orthodox religion (i.e. the Serbian and Russian Orthodox Churches), according to Bishop Amfilohij, Archbishop Bartholomew maybe should welcome everyone for talks.

Amfilohije said that Bartholomew, as the prime priest of the Church has more than once confirmed that he has no intention to interfere in the dispute between SPC and MPC-OA i.e. his own words were “he has no intention to disturb the unity of our church and the SPC’s canonical order. It is with love that the relations should be built upon and not to panic or to be mistrusting from every meeting and conversation.”

These calming statement by Bishop Amfilohij that were aimed for the Serbian public can be compared to the statement that Archbishop Bartholomew gave in May 2019 in an interview for the Bulgarian agency BGNES.

During the interview, the archbishop stated that with the ecclesiastical independence for the Ukrainian Church (despite the objections from the Russian church) the Eastern Orthodox Church only continues the tradition of recognition of newly formed autocephalous churches. He has explained that “Macedonia’s request will be considered with love, in the benefit of the believers.”