Today, in the “Camp of Liberty” in front of the government, SDSM will hold a press conference on which a new batch of audio recordings of tapped conversations of the project “Truth about Macedonia” will be announced.

According to party sources, today’s “bomb” would behave in the manner of cooperation of the ruling coalition between VMRO-DPMNE and DUI, especially the work of the officials of Ali Ahmeti’s party. 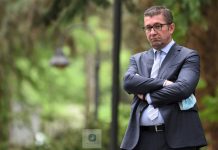 A newly leaked audio recording of Mickoski and Kicheec: Sasho provided 5.000 EUR twice for the buses for the rally on the 2nd of...