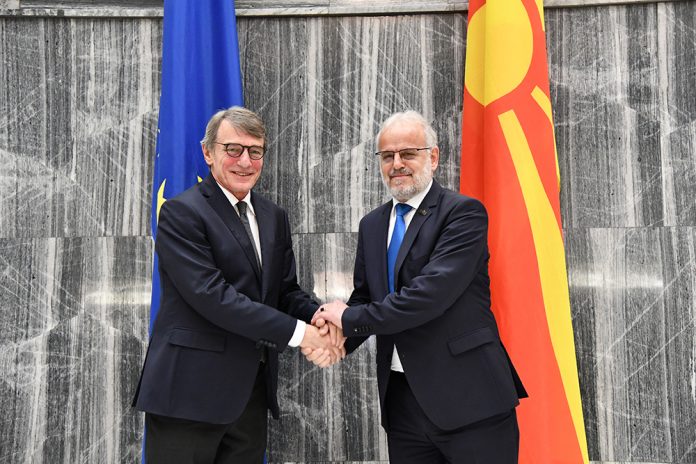 The President of the European Parliament, David Maria Sassoli, after the meeting with the President of the Macedonian Parliament, Talat Xhaferi, said that the European Council didn’t say no, but it postponed its decision for starting Macedonia’s EU accession process. He stressed that it is not a historical mistake, but a historical delay, states the press release issued by the RNM’s Parliament after the meeting.

Sasssoli has stressed that it is important that the remarks that certain countries have to be understood and to be overcome. The President of the European Parliament has stressed that our country has to continue with the reforms while the issue of opening the EU negotiations can again be put on the European Institutions’ agenda.

Xhaferi has stressed that the decision made during the European Council’s last summit was a strategic mistake that is also damaging to EU’s credibility and is sending a negative signal to countries candidates regarding the neighborly relations.

-If the reason for the rejection of the date for the negotiations is the need for establishing a new methodology for the accession negotiations that will make the process more efficient, then that is acceptable for us, but what is not acceptable for us is the alternative for the process of joining a some sort of privileged partnership or putting the country in a category of EU neighbors – said Xhaferi.

President Xhaferi has expressed his gratitude to Sasolu for the letter that he and other high ranking EU officials have sent before the European Council’s meeting where a starting date was requested for Macedonia and Albania. President Xhaferi thanked the support provided by the European Parliament that arrived in the form of a resolution for starting the accession negotiations with Albania and Macedonia.

Apart from the President of the Parliament, Sassoli also met with Prime MInister Zoran Zaev. These meetings in Skopje are Sassoli’s first visit to a country outside of the EU after he was appointed as President of the European Parliament.