Today, European Parliament urged Hungary to extradite exiled former Prime Minister and convicted criminal Nikola Gruevski on the grounds of amendments to the Resolution on Macedonia, even though they have no legal effect, but rather an ethical-moral attitude, it is still an unpopular measure for Hungary, says university professor and FON rector, Nano Ružin.

“Action, from a legal point of view, does not exist. This is more about the ethical and moral attitude of the European Parliament. This is because currently, the EU is not a supranational institution, but each state retains its right, especially in the domain of political systems, laws, etc. However, it is still one measure that is unpopular for Hungary. And it damages their reputation as a country, as a political system, as a democracy, and normally when forming a general standpoint for further sanctions, these amendments will be in one way, an argument against Hungary,” explains Ružin. 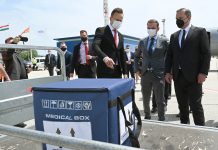