The “Javna soba” group on Telegram, which had been used for illegal sharing of nude pictures, has been closed, informed Oliver Spasovski, the Interior Minister of North Macedonia, on his Facebook profile.

“I greet this step taken by the Telegram platform and I state that those who have violated the law will be punished since we are documenting the cases thoroughly. At the same time, I appeal to carefulness since there is a similar group on the Telegram platform and we will act accordingly against the members of this group as well,” wrote Spasovski.

Apart from explicit photographs, these groups and similar ones, share photographs taken from profiles on social networks of various women and girls, along with telephone numbers and personal data, and these are used to affect the victims’ reputation. 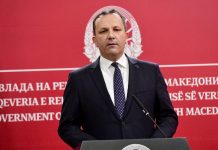