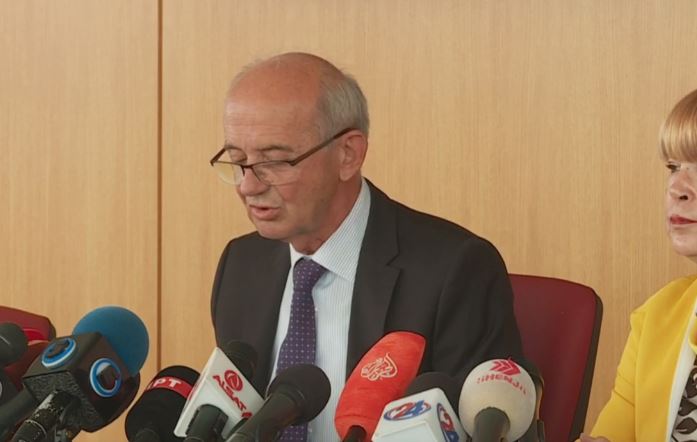 The Special Public Prosecutor Katica Janeva was arrested upon request of the Prosecution for Organized Crime and Corruption, confirmed the Chief Public Prosecutor Ljubomir Joveski. The former chief of SPO is the new suspect in the case Racket and is charged with “abuse of power and authority”.

During today’s press conference, Prosecutor Vilma Ruskoska confirmed that the arrested Janeva was firstly taken at SPO’s offices where her computer was seized.

The Prosecution refutes the information spread by certain media that at the moment politicians and other public persons are under arrest. prosecutor Ruskoska stressed that the Public Prosecution hasn’t sent a request for searching the homes of politicians and if something like that has happened then it wasn’t connected with the work of this prosecution.

The Chief Public Prosecutor Ljubomir Joveski stressed that there are no indications that the illegally acquired assets have ended in the hands of domestic or foreign politicians. When asked where is the money that was taken from businessman Orce Kamchev, Joveski replied:

-That is a sensitive question and I cannot give more details at this moment, said Joveski.

The Prosecution for Organized Crime is charging Katica Janeva that she has gained property in the amount of 298.000 in the form of material goods – furniture.

The request for detention for Katica Janeva will yet to be decided by a Presiding Trial Judge at the Basic Crime Court in Skopje.