This morning, there was a gunfight between police and still unidentified armed group in Kumanovo settlement “Diva naselba” in which 12 policemen were injured.

Road around Kumanovo is blocked and strong police forces and ambulances are deployed.

As the media report from the site, after a brief interruption, the gunfight between the armed group and the police re-kindled.

Information that there are casualties are not yet confirmed.

– Measures to crack down the armed group in the Kumanovo region after previously received operational information that in that part of the city has armed group are taken. Once the action is completed, we will inform the public in detail. Until then, we appeal to citizens to stay calm and if they see anything suspicious, to report to the police – said Deputy Minister of MOI Ivo Kotevski for META.

12 policemen are reportedly injured in the gunfight, and some of them have serious injuries, reports TV “Telma”.
Svetlana Spasovska from Karil in Kumanovo hospital said for “Telma” that three of the police officers received medical care, but all were taken to the Clinical Centre in Skopje which is under strong police protection and without permission for access of citizens and news crews.

Democratic Union for Integration came out with statement, in which it appeals the citizens to be calm and not to succumb to disinformation. 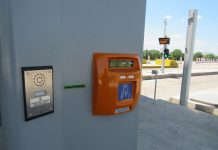