The package of laws that the political parties who are signatory to the Przhino Agreement agreed on, according to the announcements by politicians, should be found in front of Parliament today.
The Coordinator of the Parliamentary Group of SDSM Goran Sugareski, however, said that he still does not know whether the laws will be processed today in Parliament.

“We need to be in coordination with the President of Parliament, and only then will we know whether we will vote today on the legislation”, said Sugareski.

MP’s will have to vote on the new Law on Government, which defines the responsibilities of the new Ministers and Deputy Ministers, Law on Privacy, the Law on “Whistle-Blowers” and the Electoral Code. Also,the  new Ministers of Interior and Labour and Social Policy will have to go through Parliament as well.

Parties on Friday morning finalised the Przhino Agreement and opted for new Ministers to be put in placed such as Oliver Spasovski in the MOI, Frosina Remenski for Labour and Social Policy. Additionally, Deputy Ministers from SDSM will be Alexander Kiracovski for Information Society and Administration, Kire Naumov for Finance and Ljupco Nikolovski for Agriculture, Forestry and Water Management.

Today the working groups will continue to talk to the media. The deadline for the parties to reach an agreement on the media was on the 15th of October but the process was delayed because the parties were unable to agree on the Electoral Legislation. 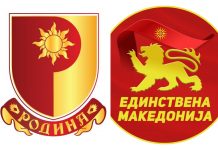