If the elections would have been organized tomorrow, 24,5 % of citizens would have voted for VMRO-DPMNE, and 23,7% for SDSM, show the results of the last polls organized by Telma TV and the Macedonian Center for International Cooperation (MCMS).

As for the ratings of the political parties, when asked which politician deserves the greatest trust, 25, 8 have decided for the leader of VMRO-DPMNE Nikola Gruevski and 24, 8 % for SDSM’s leader Zoran Zaev.

The survey was carried out by a telephone, after the violence at the Parliament of Republic of Macedonia, in the period between 10-15th of May, on 1.000 adults. It was carried out by “M-Prospect” agency on request by Telma and MCMS. 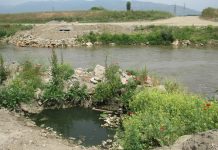 Poll: People aware they are the biggest polluters of the waters, but unaware how to protect them