Professional football player, Aleksandar Pandovski passed away this morning after he succumbed to his injuries he suffered in a car crash several days earlier.

Pandovski played for the Under 21s national squad and was a former footballer for Vardar FC, Rabotnicki FC and Turnovo FC. He last played for Euromilk FC.

Pandovski was involved in a terrible car accident when his car swerved from the road at the exit of Skopje and flew into the concrete columns at Makpetrol petrol station. 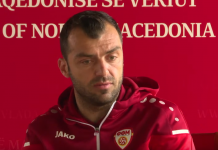 Goran Pandev: We should change the mentality and raise women football to a higher level