Meta.mk
Correspondents Petition by the municipalities from Eastern Macedonia for rescheduling a new date...

The Mayors of the municipalities from Eastern Macedonia with a petition are asking for the Association of the Units of Local Self-Government of RM (ZELS) to make changes in the Election code in order to change the local election date.

According to the mayors, the changes will allow a normal and legal functioning of the municipalities. In contrary, after 15th of May, all their activities will seize. They said that without the changes they will not be able to respond to people’s demands, to manage the grants, through which thousands of employees in the schools and kindergartens receive their salaries from, or the municipality administration won’t be able to receive a salary.

Municipalities, as stated in the petition, are already damaged by this legal – political vacuum since they cannot sell land and other tenders.

Even though there aren’t any changes with the situation in the Parliament where there is a marathon constitutive session taking place, the mayors from both sides are briefing that there are talks about an urgent change to the Election code with which the local elections will be moved. This way, a space for maneuvering will be provided for the current local authorities to continue with their work.

A working group was formed this week that is comprised of members of ZELS and the ministries of justice and local self-government that should provide directions for bridging this period. The proposal for a working group was suggested by the technical government which for the mayors is a good sign that there is a political will for surpassing this vacuum that is threatening the municipalities. The attorneys are calling upon the Constitution and the article 114 that is guaranteeing services and rights for the citizens by the local authorities. 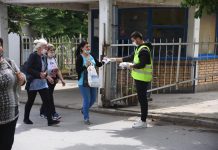