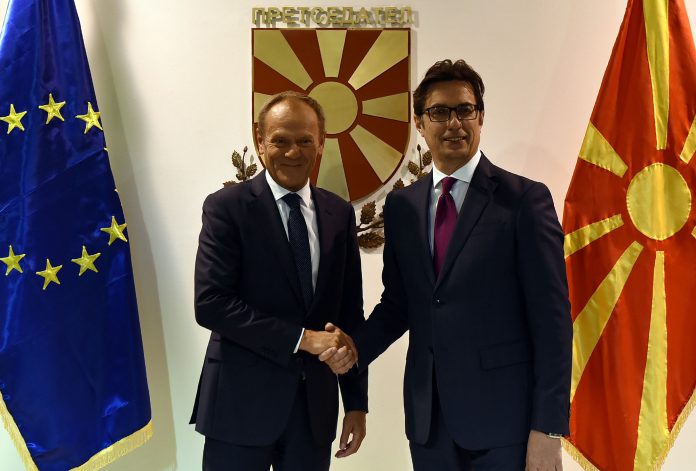 President Stevo Pendarovski has met today with the President of the European Council, Donald Tusk.

During the friendly meeting, they exchanged opinions about the situation in the country and the region as well, including the country’s aspirations for a membership in the EU.

President Pendarovski stressed that Macedonia in the last two years has made tough decisions regarding many sensitive issues, including the Prespa Agreement with the Republic of Greece and the Good Neighborhood Agreement with the Republic of Bulgaria, and has implemented essential and thorough reforms in many key areas which confirm the country’s dedication to the Euro- accession process.

Pendarovski expressed an expectation that the European Council in October will valorize the country’s efforts and will verify the 10th recommendation of the European Union by setting a date for the start of the accession negotiations for the membership of North Macedonia in the EU.

The start of the accession negotiations, according to President Pendarovski will serve as a strong impulse for future implementation of essential reforms in the state until its future membership in the EU. This will contribute to an overall stability and prosperity for the country and the region as well.

President Pendarovski thanked President Tusk for his clear and direct support for the country’s European future.