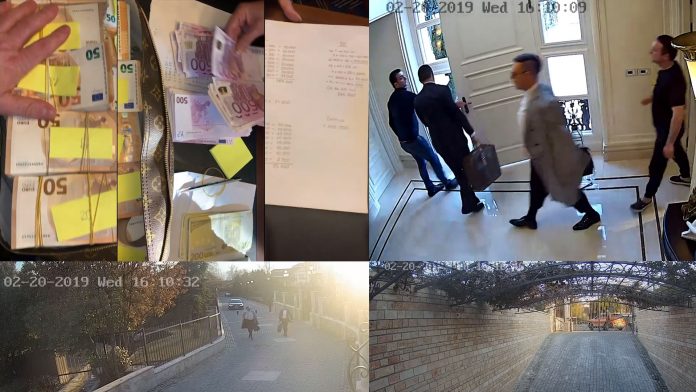 The Italian newspaper “La Veritá” (The Truth) in its online issue published parts of video footage and audio recordings related to the case “Racket” in North Macedonia, in which Bojan Jovanovski – “Boki 13” and Zoran Milevski – “Kičeec” are suspected of money extortion in order to influence the Special Prosecutor’s Office’s case “Empire”. For a certain amount of money, the detained businessman Jordan Kamčev is to be released, via influence over the prosecutor Katica Janeva. The two are currently in custody, and Kamčev, a suspect in the case “Empire”, became a witness in the Public Prosecutor’s Office’s case “Racket”. In the first forty seconds of the released footage, a large quantity of denominations of 50 Euros is displayed in a Louis Vuitton traveling bag. On this part of the footage, apparently recorded with a mobile phone, first there is a male hand showing the packed money, and then female hands counting the money in denominations of 500 Euros. The following footage, also recorded with a mobile phone, shows a handwritten document on which, as it seems, are written the numbers of 100, 200, 500 and 50 Euro denominations. The total number written on the document is one million – 1.000.000. The recording date is not visible in this part of the footage. The second part of the released video actually consists of cuts of security camera footages, most likely inside the home of businessman Jordan Kamčev. The time and date on these footages is 20 February 2019, 4:10 PM. In this part of the footage there are four people in the hallway and in front of the house.

Fist to appear on the video is Zoran Milevski – “Kičeec” with a Louis Vuitton travelling bag in his hand, and behind him is Bojan Jovanovski – “Boki 13” with another Louis Vuitton handbag. An unknown person opens the front door for them, and then Jordan Kamčev appears, accompanying them to the door. This part of the recording lasts for 26 seconds. The next footage is from a security camera in the yard of the house facing the outside road. In the background there is a black vehicle and raised automatic road blockers. “Kičeec” and “Boki 13”, still holding the bags, come out of the yard and move away from the vehicle. As they disappear from the footage, the road blockers are put down and the black vehicle makes a left turn towards the house. The following security camera footage shows “Kičeec” and “Boki 13” entering another vehicle. In the second part of the video, an audio recording is released, and on the screen English translation of the conversation is shown. On the recording, which is not a telephone conversation, the voices of “Boki 13” and Jordan Kamčev can be heard. Boki informs Kamčev that he will be released on Monday, Tuesday the latest, and that the prosecutor Katica Janeva “will not use any extraordinary legal remedies to postpone the moment”.

Kamčev was released from house arrest on 4 March by Supreme Court decision.

The entire transcript of the audio conversation: