Police brutality in Macedonia is on the rise and there are no effective investigations as was claimed today ombudsman Idzet Memeti, on basis of summarizing reports from 2016.

Speaking at a press conference at the Helsinki committee for human rights, Memeti said that the Ombudsman office has lodged criminal lawsuits to the public prosecutor regarding the case “Divo Naselje” and two were rejected.

Two of the criminal lawsuits that were not rejected refer to a suspicion of police brutality during the transportation of accused persons from the jails to the courts and the other of the brutality of a large number of prison guards over accused persons.

-Unfortunately, the Public prosecution office trusts the police and its claims more that there hasn’t been any brutality than the evidence that is offered by the Ombudsman in the criminal lawsuits – said Memeti.

Memeti’s statement was given at the promotion of the “Citizen’s monitoring of the Ombudsman” that has to determine the attitude of the media towards the ombudsman’s office and is implemented by NGO Infocenter in collaboration with the Helsinki committee and is supported by the US. 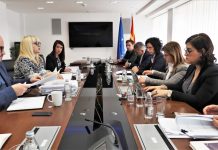