30-year-old Ohrid citizen yesterday, at home, inflicted injuries to his friend, who was visiting him with his wife, with a machete, reported SOI Ohrid.

According to its representatives, A.R. (30) was injured in the stomach, left hand and face and was transferred and held for treatment in the medical center in Ohrid.

The attacker, V.K. (30), was apprehended and criminal charges will be filed against him after the case is cleared up.

The incident happened around 1:30 pm, at the house of V.K., at street Radojca Novichikj, in Ohrid, when there was a quarrel between the two friends, and then the suspect swung with a machete and inflicted the injuries to his guest. 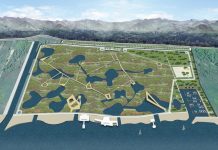 With mobile application “National Park Galicica“, the beauties of Galicica became available to everyone