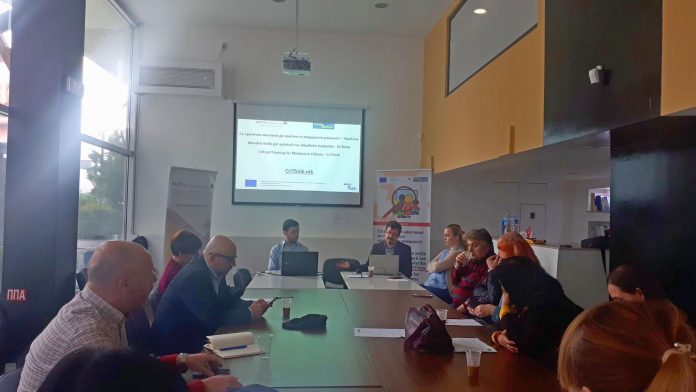 The Foundation for Internet and Society “Metamorphosis” and “EuroThink” – Center for European Strategies today held a closed briefing meeting with the grantees from the small grants program of the project “Critical Thinking for Mediawise Citizens- CriThink”, implemented with support from the European Union.

Within the framework of the first grant scheme of the project “Critical Thinking for Mediawise Citizens – CriThink”, today projects were presented that were made in the period from October 2018 to March 2019.

Six projects have been implemented in six planning regions by civil society organizations who were in partnership with the media.

Within the realized activities, 45 multimedia contents and 39 graphic materials were produced, 28 training workshops were held, 12 public events, two studies and analyzes were made.

Four hundred and five people were trained at the workshops, and training workshops were held in eight different cities. There were 1099 attendees at the public events, 904 high school students, 92 state and local institutions, 51 media workers and 38 representatives from the civil sector.

The projects were mainly aimed at encouraging critical thinking among young people and their media literacy, for which high school students showed a special interest as well as inserting topics into their educational program in a more interesting manner.

“The goal of the project was to promote critical thinking among young people. We have held media literacy training for high school students from Ohrid, Struga, Kicevo, as well as training for young journalists. The training was for deeper media literacy, fake news and hate speech. From the training, there were videos and interviews that were received well in the Alasat-M emissions”, Rashidi said, adding that the problems with local media are because there is no control over the large number of fake news that is spread from there.

Local media reporters who supported the project said that they also need training to identify fake news because they are not have enough education on the topic.