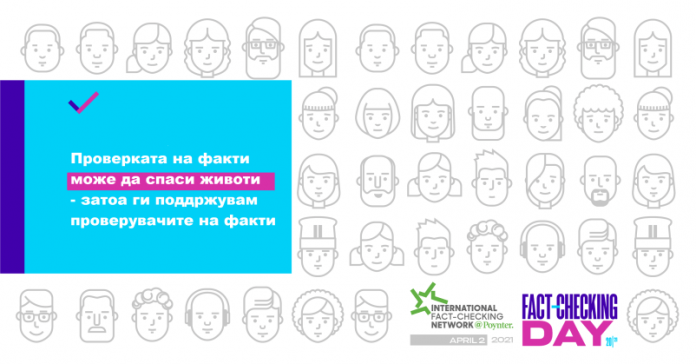 The fact-checking is just a small part of the fight against disinformation, which is a hard and arduous undertaking in this digital age, amidst the rising impact of social networking on our lives. This is the conclusion of the panel discussion on the occasion of the 2nd of April – The International Fact-Checking Day, which was organized by the Metamorphosis Foundation from North Macedonia.

“The Metamorphosis Foundation is a member of the International Fact-Checking Network from the very beginning, and we, as an organization, very early on recognized the importance of the fight against the disinformation and always strived through a variety of tools, projects and activities, to fight against the harmful effects of disinformation. The fact-checking is a pretty small, but important part of these activities, which are intended not only to debunk false information, but also to fight against its consequences. This is a very heavy and intensive combat, especially now,when the sources of disinformation on the internet are numerous and diverse,” Bardhyl Jashari, the Executive Director of the Metamorphosis Foundation, said.

He reminded of the early days, when the foundation began with the fact-checking work in the year 2011, when fact-checking wasn’t so popular and had been seldom done, although, according to Jashari, it should have always been practiced in the more serious and professional media.

“Intentionally or unintentionally, the fact-checking is being identified as censorship, which is not true. The fact-checking is important activity based on predefined methodology, which does not intend to assert an absolute truth, but, on the contrary, to allow a debate on a variety of topics by confronting the topics and arguments, with the purpose of freedom of speech,“ Jashari pinpointed, adding that the role of the fact-checkers is to ensure that the citizens are properly informed, that they can recognize the credible sources of information and make decisions based on verified and accurate information.

Filip Stojanovski, the Program Manager of the CriThink project shared his experience gathered in the first three years of the project, and, as he worded it, the work of “CriThink” is part of an international process.

“We have begun with the so called “political fact-checking” – checking the facts and the statements related to the promises of the politicians, and later on we came to a conclusion that the media also have an important role to play, and that’s why we established the Media Fact-Checking Service, which is based upon the employment in practice of the principles of ethical journalism. In the meantime, it has become a global trend, and we were the first ones in the region, and, along with a number of partners, we have established the Balkan Anti Disinformation Network. Working in these fields, we realized that in addition to the fact-checking and educating the journalists, we have to work with the wider audience, because fact-checking is not enough for countering the various types of disinformation. The propaganda itself does not bother with the facts, but with other forms of manipulation, in particular the manipulation of the emotions,“ said Stojanovski.

He clarified that within the framework of the project “Critical Thinking for Mediawise Citizens – CriThink”, implemented in co-operation with EUROTHINK – Centre for European Strategies and supported by the Eropean Union, apart from advancement and expansion of the activities for spreading media literacy through fact-checking, also includes activities for advancement of the media literacy of the people outside of Skopje, the capital of North Macedonia, who are facing the same type of problems, but have only a limited number of resources of information and fact-checking.

As the most important, he pinpointed the cooperation with Facebook, within the third-party fact-checking program of the social network.

The editor for fact-checks in Macedonian language and Editor-in-chief of Truthmeter.mk, Vladimir Petreski explained the methodology of the fact-checking process, and as the first take of the Metamorphosis Foundarion in this field, he spoke about the Media Fact-Checking Service.

“The fact-checking does not vary much from the standard checks that the journalists do when creating news articles, reports and stories. The difference is that in this context, the fact-checkers do that after the article or the TV content was published or broadcasted,“, Petreski explained.

Elida Zylbeari, the editor for fact-checks in Albanian language in CriThink and Editor-in-chief of Portalb.mk said that fact-checking during the pandemics is crucial, because it can actually save human lives, as we can see that in the media and in the social networks there is great influx of information about alleged cures, anti-vaccines campaign or distrust in the medical institutions with the aim to disencourage people to visit a doctor, etc.

She pointed out that very often one see commentaries hidden within an article, which is impermissible, since in that case there is a mix up of two different genres of journalism. Zylbeari pointed out that the gathered experience in the reviewing and fact-checking done within the CriThink project shows that one of the main problems is the journalists inserting their views in the articles and CriThink, with its reviews, points out where and when the journalists did exactly the thing that is impermissable according to the Ethical Codex of the Journalists of North Macedonia.